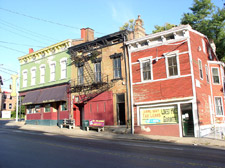 Select Commercial is a leading commercial real estate lender. We have excellent commercial mortgage loan products and options available for owners and purchasers of commercial real estate and multifamily buildings throughout the state of Ohio. While we lend across the entire continental United States, we are able to give our best rates and loan programs to certain areas that we feel are strong markets. Ohio is one of the states that we consider to be a premium market and we actively look to originate good quality loans here for our clients. We have a diverse array of many available loan products to help qualified OH borrowers looking to purchase or refinance a commercial property. If you are looking to obtain an multifamily building loan or commercial real estate loan, don't hesitate to contact us. There are many reasons why our customers like doing business with Select Commercial. We have a simplified application process and we do not charge any upfront application or processing fees. We typically offer 24-hour pre-approvals with no-cost and no-obligation. Our long term fixed rates are excellent, and we look to close within 45 days of application. Our staff is professional and knowledgeable, and we look forward to working with you on your next commercial mortgage transaction.

Ohio commercial mortgage rates start as low as 2.68% (as of 03/04/21)
• No upfront application or processing fees
• Simplified application process
• Up to 80% LTV on multifamily , 75% on commercial (90% with SBA)
• Terms and amortizations up to 30 years
• Loans for purchase and refinance, including cash-out
• 24 hour written pre-approvals with no cost and no obligation

We arrange commercial mortgage financing in the state of Ohio for the following:

Ohio is the seventh largest economy in the United States with a gross state product of over $650 billion. If Ohio were its own country its economy would rank as the 21st largest economy in the world. A few years ago, Ohio was ranked in the top ten states in the country for best business climate. Ohio is frequently considered to be the Industrial Capital of America, dating to its roots in the Rust Belt and Ohio's present-day scientific and intelligence dominance. Ohio has a very active commercial real estate market and is highly regarded by lenders offering commercial mortgage financing. Here are some quick facts:

Overall the Ohio apartment market ranks among the most consistent in the nation in terms of performance making Ohio a terrific place to receive commercial mortgage financing. There has been a tempered supply growth in multifamily units resulting in strong rent gains in various markets.  These trends are expected to continue as vacancy in all the Ohio’s big markets remains below 5 percent. There is a lot upside potential in the Class C sector, where a housing shortage continues across the Ohio market. Vacancy is lowest in this segment with below average rent hikes. The Cincinnati multifamily market is very hot right now. We have been witnessing Steady demand across all apartment classes. Over the past four years the demand for rental units in Cincinnati has been stable, bolstering absorption totals that outmatched supply additions. The city’s economic strength has supported the growing demand pool as people move into the region in search of new employment opportunities. The wide reach of the demand pool here bodes well for existing property performance and future development. Commercial real estate builders are doing most of their work near the core of the city, where new developments will provide residents a highly amenitized experience in proximity to work and leisure venues. Cleveland is also a very intriguing spot for commercial real estate and multifamily investment. Downtown Cleveland has remained the focal point of the city’s current real estate development. The city’s rental market has turned around recently, with heightened demand diminishing the vacancy rate by 170 basis points. Throughout this period development has remained strong with more than 2,000 multifamily units added to the local inventory.

Ohio’s average rent is typically lower than the national average. Apartments in Cleveland are the state’s most expensive, with an average rent of $1,081 per month. Cincinnati apartments rank second with an average monthly rent of about $975 followed by Columbus with average monthly rents of just under $924. Ohio’s cheapest cities to rent in are Toledo at a meager $714 per month and Dayton at just $765 per month. That being said Dayton rents are trending upwards (renters are paying $34 more per month than they did in April of last year) as the city is experiencing growing rents, with apartment prices increasing by 4.7% year over year. Behind Dayton, Cleveland apartments had the second highest rental rate increase in Ohio, with increases of 4% or $42 more expensive than the same month last year. Ohio’s slowest rising rents were in Akron with a small increase of 2.1%, and in Toledo, where rents rose by just 2.3% year over year. In terms of commercial mortgages, there are over 2 million mortgages for commercial real estate properties throughout the state of Ohio. The average value of these mortgages is just above $6 million, 14% above the United States average. This information shows that Ohio is a wonderful place to take out a commercial mortgage loan.

Select Commercial provides commercial mortgage loans and multifamily financing throughout the state of Ohio including but not limited to the areas below.