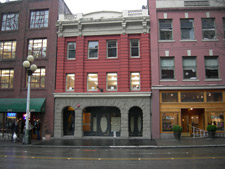 Select Commercial is a leading commercial real estate lender. We have excellent commercial mortgage loan products and options available for owners and purchasers of commercial real estate and multifamily buildings throughout the state of Washington. While we lend across the entire continental United States, we are able to give our best rates and loan programs to certain areas that we feel are strong markets. Washington is one of the states that we consider to be a premium market and we actively look to originate good quality loans here for our clients. We have a diverse array of many available loan products to help qualified WA borrowers looking to purchase or refinance a commercial property. If you are looking to obtain an multifamily building loan or commercial real estate loan, don't hesitate to contact us. There are many reasons why our customers like doing business with Select Commercial. We have a simplified application process and we do not charge any upfront application or processing fees. We typically offer 24-hour pre-approvals with no-cost and no-obligation. Our long term fixed rates are excellent, and we look to close within 45 days of application. Our staff is professional and knowledgeable, and we look forward to working with you on your next commercial mortgage transaction.

Washington commercial mortgage rates start as low as 3.00% (as of 05/07/21)
• No upfront application or processing fees
• Simplified application process
• Up to 80% LTV on multifamily , 75% on commercial (90% with SBA)
• Terms and amortizations up to 30 years
• Loans for purchase and refinance, including cash-out
• 24 hour written pre-approvals with no cost and no obligation

We arrange commercial mortgage financing in the state of Washington for the following:

Within the commercial real estate market, investors would benefit from looking into multifamily buildings in Washington. Nationwide, vacancy in the multifamily and apartment market has declined with a current rate of 7.0%. Due to both an increase in the demand for housing and inward migration, Washington has shown an even greater decline in vacancy rate. The statewide vacancy rate of 4.3% is predominantly driven by higher vacancy rates occurring in the more urbanized areas in Washington. As new supply continues to come into areas such as the Spokane, Clark County and Puget Sound markets, this vacancy rate underlines vital regional issues in the multifamily market. Even though vacancy rates differed throughout Washington, every county outside of the Puget Sound had vacancy rates below 3% for one-bedroom apartments. The lowest vacancy rate for these apartments was Walla Walla County at 0.0% while the highest rate was in Spokane County at 2.96%. Outside of the Puget Sound region, the highest rent levels for one-bedroom apartments are in the Chelan/Douglas county area with an average rent of $1,152. The lowest rents were recorded in Yakima County at $642 per month. The second most prevalent type of apartment and multifamily unit in the state are the units with two bedrooms and one bathroom. King County had the highest average 2BR/1 Bath unit rent at $1,746 while Yakima County recorded the lowest average rent of $807. Outside of the Puget Sound Region, the average vacancy rate for these units was 1.4%.

Seattle has by far the most active commercial real estate market in the state. The city’s reputation as the home of huge corporate players such as Amazon, Starbucks and Microsoft has positively impacted its economy. Furthermore, the inflow of Fortune 500 companies into the city has increased interest in Class-A office space Downtown, while the need for living space for new high-paid workers has increased demand for luxury housing. Across the whole spectrum, the commercial real estate investment outlook remains positive. The JPMorgan Chase Seattle team recently closed a $4.8M refinance next to Roosevelt Station. The property is anticipated to serve as an extension of the light-rail line. Seattle's industrial market has remained strong this year. In Kent Valley, the vacancy rate was 4.2% up 0.04% year-over-year. The overall average asking rent was $7.45 per square foot. This data demonstrates that Seattle is the perfect place to look into receiving a commercial mortgage loan.

Select Commercial provides commercial mortgage loans and multifamily financing throughout the state of Washington including but not limited to the areas below.